Tees to success: Enchelmayer more than a golfer 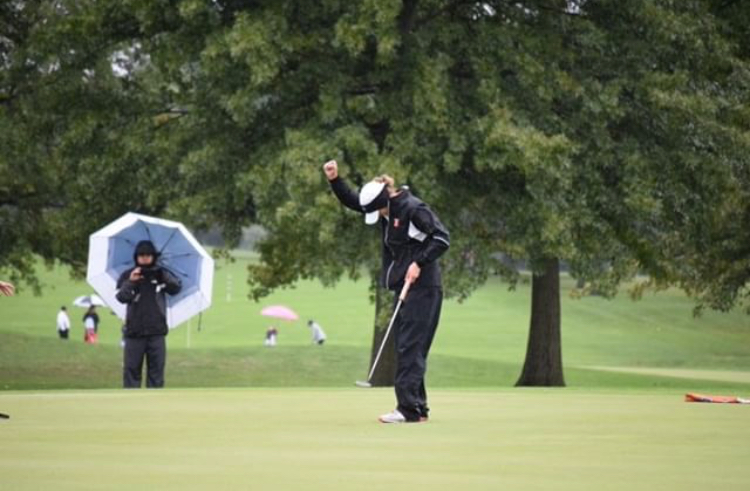 Senior Allison Enchelmayer pumps her fist in celebration after completing a putt during a rainy day at the State competition.

While sports and sound are often linked: players listening to their headphones to get “in the zone”, music blasting out of speakers at athletic events, the crowd cheering wildly… Golf and sound are not.

Golf is a sport that literally asks for quiet.

But for senior Allison Enchelmayer, golf and sound go together perfectly.

Or more precisely, golf and music do.

Enchelmayer, who has been playing golf for over thirteen years, learned more about the sport from her dad during junior high.

“He got me into it when I was really young and I didn’t really take it seriously until junior high,” Enchelmayer said. “I always kind of played for fun with my family because it was a good thing for all of us to get outside and enjoy the weather together.”

But when the weather in Central Illinois isn’t enjoyable, Enchelmayer still finds a way to keep busy outside of school. She is a member of the NCHS acapella group Key of She and, this winter, she is again involved with Madrigals. Madrigals is a Renaissance-era musical theatre performance put on by the chamber choir and court singers during the holiday season.

“We learn somewhere around twenty songs and do like a dinner theatre show. That’s the biggest thing of the year.”

The biggest event for a high school golfer is State. While throughout the girls golf season, the team competes in tournaments and matches, the ultimate goal for most teams is the State tournament.  While the NCHS team didn’t qualify, Enchelmayer did and competed at the 2018 State competition as an individual.

“It’s really exciting,” Enchelmayer said. “Especially this year because I got to go all four years. It was hard though because the team didn’t get to go with me this year, and I went alone junior year too and that was challenging.”

Enchelmayer practices and prepares for golf all year long, something she will continue in college at the University of Evansville in Indiana, even when her schedule becomes hectic. For Enchelmayer fall is the busiest time of year. She starts preparing for Madrigal performances in May all the way until the dinners in late November and early December

“We work super hard all the way up till the dinners,” Enchelmayer said. “It’s hard missing a lot of school and missing practice time, but you just have to do everything on your own and prepare outside of school.”

The golf season started in early August and continued through mid-October when State was held.

“I really wanted to do well,” said Enchelmayer on attending State. “And I think that pressure kind of got to my head in the first couple holes on the first day and it scared me, but after I realized I just needed to enjoy it because it’s senior year.”

After graduation in May, Enchelmayer won’t just be playing collegiate golf for the Purple Aces, but majoring in Music Education in Evansville as well.

“I’m really grateful for the music program that we have here because it really helped me pursue my love for music.”

Middle school was the time that Enchelmayer first became involved in school choir and started approaching golf more seriously – and she has stuck her course.

“Music and athletics don’t usually collide that often. I’m really lucky that I’m able to do both of those things.”

While music and athletics are linked, for Enchelmayer it has been a collision, not just a connection.