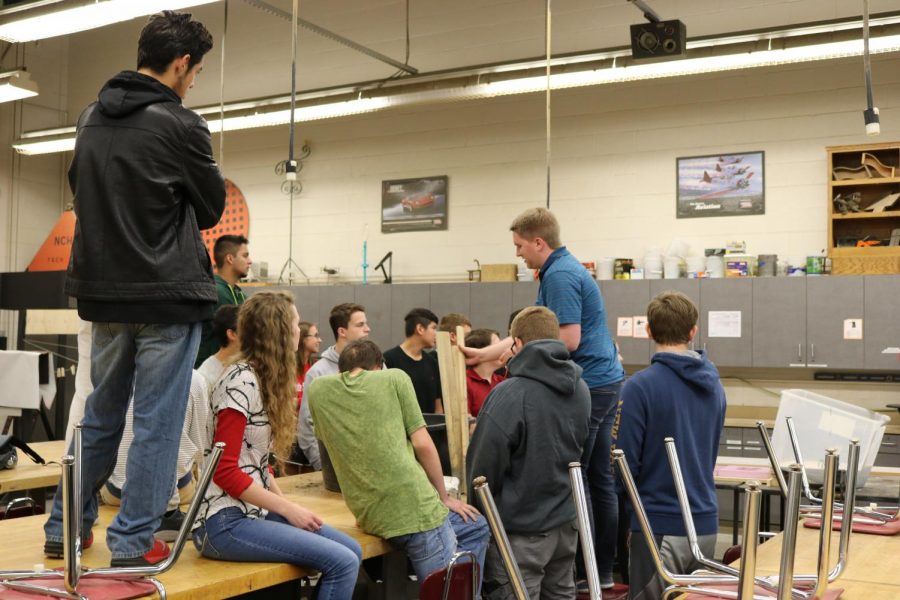 Mr. Matt Emberson's Material Applications and Processes class learns how to do a Concrete Lab.

All the students knew was these boxy new machines that monopolized desk space.  They knew the pixelated green text that would appear on the black screen. They knew the hum of the machine as it worked to read programs from floppy disks.

If they even really knew anything about computers at all. They had been hearing about these things – computers. But what did they really know about them?

This lack of knowledge didn’t stop the students’ excitement for this new technology.  For one girl specifically, this excitement hit a peak when her high school purchased their own set of computers. She had been hearing about them, everyone had, but to have access to them?  This new purchase lead that girl to spend hours after school typing long codes, programming on those computers, unknowingly programming a new passion in her life.

The STEM field and STEM education focus on the integration of science, technology, engineering, and mathematics – using knowledge from the four disciplines together to solve problems in today’s world. While women make up 47% of the overall workforce,  only 24% of STEM jobs are held by women according to esa.doc.gov. That percentage drops when comparing the number of female students to the number of male students in STEM classes at the high school level. The disparity of females to males in the STEM classrooms will not solve the issue of women in the STEM workforce.

At Normal Community High School, male and female students are almost equally represented in the science and math realms of STEM. In a sample of three of NCHS’s Honors Geometry classes, there are a total of 74 students, of those, 40 are females. In two of NCHS’s AP Statistics classes, there are a total of 47 students with 29 females. While math is a prerequisite and a graduation requirement, the honors and AP math classes are not, yet the numbers of male and female students are well balanced.

It’s the other side of STEM, the engineering and technology aspect, where the gender discrepancy exists amongst students.

In the Civil Engineering and Architecture class, 10% of the students are girls. In 3D Animation and Rendering class, 13% of students are girls. In STEM Capstone class 6% of students are girls. As students get into those higher course levels of STEM, the already low numbers of females student in those classes drops even further. Animation and Rendering has the highest percentage of female students out of those three classes and has no prerequisite- it’s a baseline class. Civil Engineering and Architecture which has a prerequisite of one year of Introduction to Engineering has the second highest number of females students out of these three classes, and then STEM Capstone requiring the most experience to take the class has the lowest numbers of female students.

At NCHS some teachers believe they understand what is causing this issue. “It’s social stigma,” Ms. Brittany Herzovi, a Computer Science Cohort teacher, said. Herzovi recognizes that in the past women “haven’t been in the field” and as a result society has apprehensions: “how can they know what to do?”

This is problematic in Herzovi’s eyes, because if female students are never given the chance in the field, then they will never get the chance to see if STEM is suited for them.“How can they know what to do if you don’t allow them the chance to try?” This way of thinking carries out into schools.

Science and math classes have been made as graduation requirements, yet engineering and technology classes have not. Some students are able to go through their four years of high school and not even step foot in an engineering or tech class. By making math and science classes part of the graduation requirements, that sends the message that everyone has the capability of being successful in those classes. Society has progressed enough to see that much is true, yet it is still lagging in the aspect of engineering and technology.

Although society is moving in the right direction, it is still holding on to some of those notions where “females are nurses and males are engineers,”  Mr. Donald Whitman, a STEM teacher and the Technology Department head at NCHS, said.

Although there is nothing wrong that, it has just become the default setting of society. Society is continuing to follow the social stigma that has been laid out through the majority of history.  Out of the 52 students enrolled in NCHS’s Educating Young Children class, there is only one male student taking the class. In NCHS’s Interior Design class out of the 29 students, only three male students are taking the class. But these divided statistics don’t have to stay like this.

Both male and female students are both equally valuable in the STEM classes. “STEM is gender neutral,” said Mr. Whitman. “It’s black and white, right or wrong. It’s about investigating, it’s about seeking answers. It doesn’t care if you are male or female.”

STEM is a field that is open to everyone regardless of their genders, but despite that society is still holding on to the stereotype, “when you think of computer science, you think of boys that code,” Sharon Hafen(12), a female student enrolled in Material Applications and Processes said.  In Hafen’s Computer Science Essential class there are only three other girls in the class.

The fact that there are so few girls in those STEM classes “can kind of be unnerving in a way,” Hafen said. “There are kind of a lot of stereotypes that come along with it, and even when, like, other people in the class are accepting that you’re in there, there is still that underlying, like, why are you here?”

It can be difficult for a girl to want to join a STEM class when she knows she is going to be one of the only girls in the class. And even though society is moving in a progressive direction, that girl that can easily feel like she doesn’t belong in the class.

So how can NCHS get more female students into those STEM classes?

Well, STEM can be perceived as a field that is full of analytics and numbers, especially by outsiders looking in. “I think [girls] see the coding,” Feeney said, “and think it’s maybe more rigid and it’s not as creative, but it can be very creative.”

By showing students that there is more to STEM than just measurements and complicated equations and that there is a more creative aspect to STEM as well, can possibly help interest more female students in STEM classes.

The way to do that is through girls who have or are taking those STEM classes sharing their experiences. Not only would that highlight the overlooked aspects of STEM, but it can also help encourage more female students to sign up for those classes. When girls see that there are other girls taking those classes they are going to be more likely to want to join.

Creating STEM clubs that are run by girls would be another way to encourage female students to give STEM a try. “Sorry boys, but if it’s run by girls, maybe more girls would do that,” Mrs. Hawkins, the Post High School Counselor at NCHS, said.

A STEM club for girls would give girls the chance to try STEM out and see if it is something they would be interested in. It allows girls to experience STEM in an environment that is comfortable to them, and it shows girls that STEM isn’t a field just for guys. In fact, NCHS just held its first meeting for a club called, Girls Who Code on Wednesday, September 26.

STEM is a field that is becoming increasingly more important to our society. Society can no longer turn a blind eye to gender imbalances within this field because the need for STEM workers is so great. It can no longer matter whether that worker is male or female because either way if that person is given the proper knowledge and skill sets they are going to be able to succeed in STEM- regardless of their gender.

And it all starts in high school.