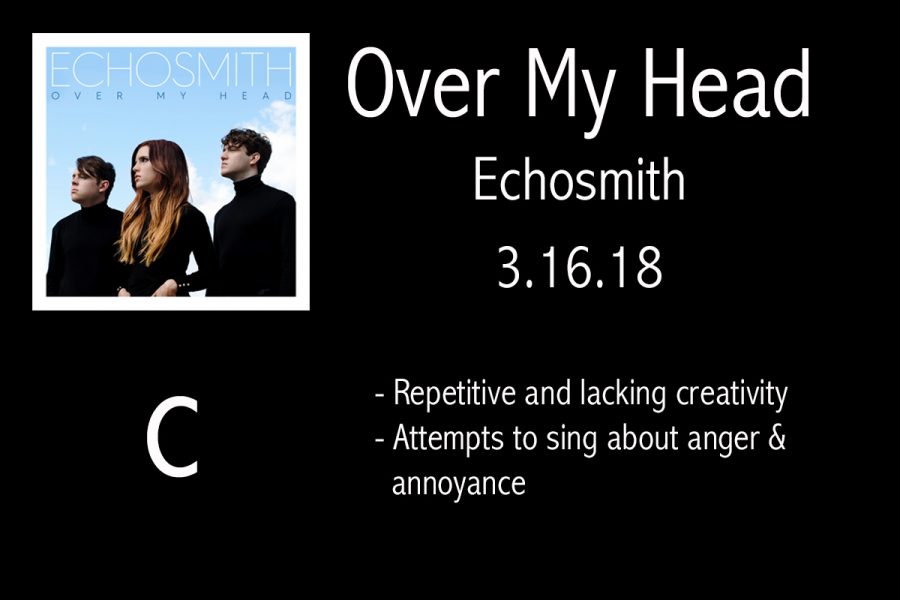 The newly released Echosmith song “Over My Head” is one you will want to get out of your head.

Hit songs are rare and difficult for artists to produce. Artists aren’t able to make every song a hit, and Echosmith is no exception. This release fails to recapture the successful pop sound Echosmith achieved with their 2013 debut track “Cool Kids.”

“Over My Head”, released on March 16,  is not a song that will cause listeners ears to bleed, but it is not one that listeners will hope to hear on the radio.

The lyrics of “Over My Head” are very cyclical – there is too little variety in the words used in the song. There becomes a point when artists are no longer creating a chorus by repeating lines, but they are filling a void of lack of creatively. “Over My Head” has reached that point.

Not only do the lyrics lack creatively, but the instrumental portion of the song does as well. Every note sounds too synthesize and like the lyrics is heavily repeated throughout the track.

The best music occurs when the listener can feel the musician’s emotions through the song, not just in the lyrics, but by the way the drums are pounded, the guitar is being shredded…. In “Over My Head” that vibe is never accomplished.

Throughout the song, Echosmith tries to get an angry and annoyed mood across, but there was something holding the band back from accomplishing that goal. It’s as if they haven’t really experienced the pain and upset they are trying to sing about. Anger and rage are supposed to be messy, but Echosmith’s song was just too neat. It was too in beat and too in tune.

Sometimes instruments can speak where lyrics cannot, but Echosmith’s guitarist, Jamie Sierota, can hardly be heard within the song. The band fails by not utilizing all of their musical resources in “Over My Head.”

Echosmith has the potential to produce highly successful music, they proved that by their hit song “Cool Kids,” which peaked at number 13 on the Billboard music charts. But with their new song, it seems like they are trying to mimic someone else’s voice rather than finding their own. Parts of “Over My Head’s” melody are easily comparable to the Wizards of Waverly Place theme song, and although that brings back good memories of childhood, it’s not something listeners want to jam out too – this connection doesn’t fit Echosmith’s target audience.

The group’s new song, although not appealing to everyone, may appeal to those who enjoy pop music with little rich instrumental sounds and lyrics that have one or two catchy phrases, but overall there is nothing beyond the song’s face value – no deeper insight or meaning.

Echosmith recently concluded their North American tour with The Score and Jena Rose on May 12 in their home state of California.