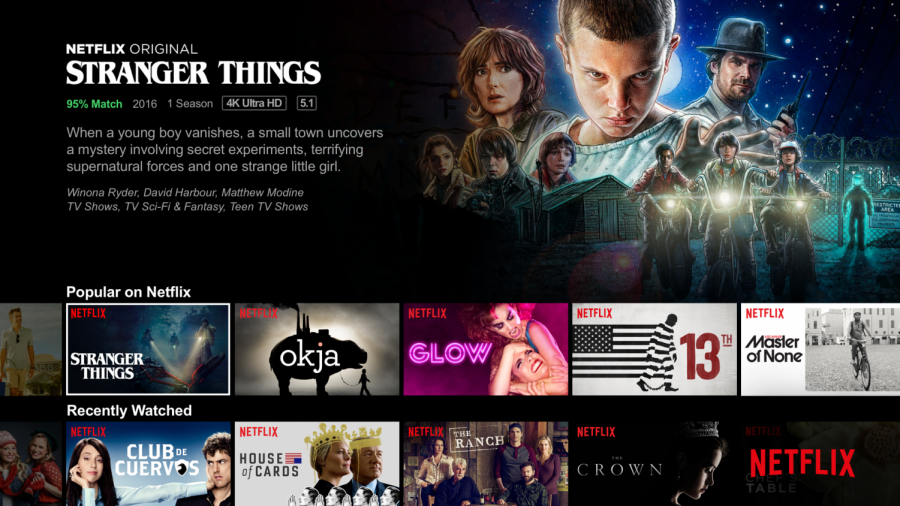 NCHS students are part of a growing national trend-they are binging. Binge racing.

Binge racing, or watching an entire season of a Netflix Original Series within 24 hours of its release, is a phenomenon speeding across the world and the NCHS hallways.

Between 2013 and 2016, the amount of launch day finishers increased 20 times, according to a Netflix press release.

There are however more Netflix Originals available to binge. In 2013 Netflix offered 5 Original Series including House of Cards and Orange is the New Black, compared to the over 40 produced in 2017.

Netflix CEO Reed Hastings announced last year that the company plans to spend about $6 billion on developing original programming in 2017.

Stranger Things was the most frequently binged show, completed by 42.9% of the racers surveyed, whereas 11.9% completed the second most popular show – 13 Reasons Why.

Stranger Things first season focuses on the disappearance of a young boy in 1983 Indiana. The search draws the character’s friends, family, and the local police into a mystery involving top-secret government experiments,  supernatural forces, and one strange, waffle-loving little girl.

Netflix reports that 8.4 million of their subscribers have binge raced. Globally, they sci-fi thriller Stranger Things is the 10th most frequently binge raced show, whereas the four-part mini-series Gilmore Girls: A Year in the Life was the most popular.

There does not seem to be a dominant genre amongst binge racers. NCHS students top 5 most binge raced shows rounded out with half-hour sitcom Fuller House, the hour-long drama Orange is the New Black and the animated series Voltron: Legendary Defender.

When it comes to binge racing, “there is a unique satisfaction that comes from being the first to finish a story,” Brian Wright, Vice President of Original Series, stated.

NCHS students will have the opportunity to experience this satisfaction when Stranger Things season 2 premieres this Friday, October 27.

Stranger Things co-creators Ross and Matt Duffer have already confirmed a third season of the series. In an interview with Vulture, Ross Duffer said the series will likely be “a four-season thing and then out.” No announcement on the fourth season has been made yet.

A second season of 13 Reasons Why, based on the Y/A novel by Jay Asher, was announced in May and is set to premiere in 2018.

*Methodology: A random sampling was taken of students with 6th-hour lunch across age groups. This sample size produces a confidence level of 95%.