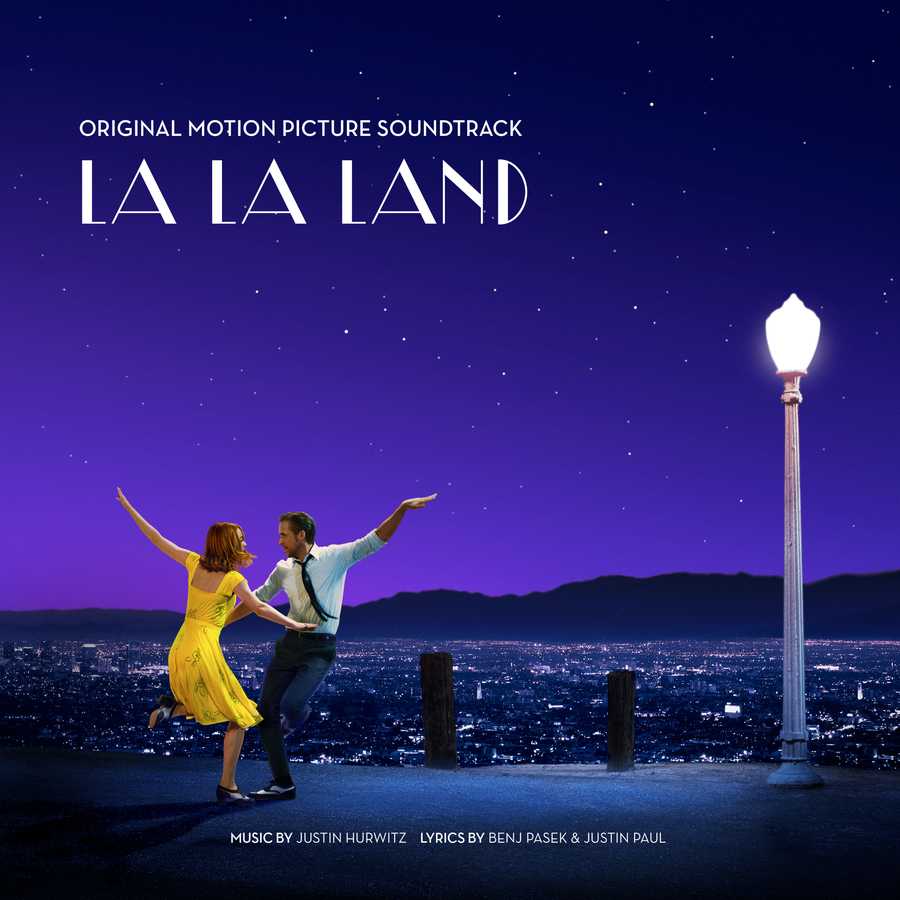 Interscope Records’ "La La Land: Original Motion Picture Soundtrack" — which features songs from the original musical film, "La La Land, from Lionsgate’s Summit Entertainment label and starring Emma Stone and Ryan Gosling — has leapt to #1 in pure album sales and #2 overall on the Billboard Top 200 album chart. In addition, the album comes in at No. #2 this week overall with over 42,000 album equivalent units.

Hollywood’s Golden Age brings to mind movies like Casablanca, Singin’ in The Rain, and Breakfast at Tiffany’s – movies that share a certain style. Movies of the Golden Age have a romantic feel to them, creating a world where everything is perfect or at least there is the hope that it can be. An abundance of thought is put into the costuming, the soundtrack, the script, even the way the actors move. These special elements separate films of the Golden Age from those of today. However, Damien Chazelle’s December 2016 release, La La Land, is changing this.

Today’s films and television shows tend to be much raunchier than movies from the 40’s and 50’s. It’s not uncommon in today’s society for a children’s show, such as SpongeBob Squarepants, or the PowerPuff Girls, to have adult references that go over the child’s head- but not the parent’s. For example, SpongeBob often sneakily uses profanities. In one episode, the character enunciates the second syllable of Texas, and then shakes his butt.

Despite the fact that television and film can sometimes be off color and on the raunchier side, it is still important that we as students learn to appreciate the art forms. Film, art and music appreciation is a value that is not taught in the core curriculum of schools today. Art is something that is not valued as highly in schools as subjects like math, science, or English.

Of course, there is the occasional film or art appreciation class, but most students do not have time to take these courses, because there are courses that are required by the Illinois State Board of Education for students to graduate. Students today are loaded with AP and honors courses because they know that they can get college credit for those, rather than the “fun” classes that they are more interested in.

Film appreciation is a valuable tool that is even more rarely taught than art or music in public schools in today’s society. Even when it is taught in public schools, it is something that students must seek out on their own; it is not taught in required classes. At NCHS, with the exception of Literature of the Silver Screen, film appreciation is touched on rarely- if at all.

La La Land is a movie that can be used to teach film appreciation far and wide, because it is such a relatable film and can be seen as the “gateway” to musicals. There is a multitude of theatrical and film related aspects of this movie that can be easily analyzed by even high school students.

Everyone has different tastes in film; some people like action movies, some like rom-coms, some like mysteries or thrillers. We can all appreciate different aspects of movies based on what kind of movies that we like. Many aspects of this particular movie- from color, to lighting, to angles, to shots, to sound- set it apart from other movies. La La Land can be known as the “gateway to musicals”. Film appreciation isn’t about loving every movie, it’s about learning to appreciate aspects of movies that you might not even like.

As someone who does not typically choose a musical to watch for fun, La La Land was a game changer for me. My favorite types of movies traditionally are rom-coms, chick flicks and the occasional sad film. I love The Fault In Our Stars, Love Actually, Love Rosie and 27 Dresses. So as you can see, I obviously stick to the same genre of film and am not too adventurous with films. I honestly dread musicals (unless it’s anything from the High School Musical franchise or La La Land). Annie, Hairspray, Les Misérables – I don’t like any of them.

However, I thoroughly appreciate every aspect of La La Land. What I appreciate most about the film is that the actors and actresses who were cast are not the normal “Broadway” type. The opening scene of La La Land begins with a traffic jam in Los Angeles, where everyone proceeds to dance on top of their cars while singing a cheery song called “Another Day of Sun”. With the exception of this exposition scene, there are not necessarily cheesy breakouts into song. Trust me- if I can like a musical, so can you.

This film has been breaking records and it has only been out since December. La La Land has already won seven Golden Globes, and was nominated for fourteen Oscars; being tied with Titanic and All About Eve for the most nominated movies in the history of the Oscars. Even though there was a mishap with Moonlight and La La Land, La La Land still took home 5 Oscars (which is pretty impressive).

La La Land transports the viewers back to the golden age of film of the 40’s and 50’s. Almost everything in the movie, from how Ryan Gosling swings around the light post at the beginning of “A Lovely Night”, to Mia’s Ingrid Bergman wallpaper in her bedroom – is an allusion to movies of the past. And although the target audience of the film is the lovers of the golden age of film, it is a movie that everyone can love. The story of La La Land is told in a modern way, yet with all of the references to old films, and all of the jazz that the movie incorporates, it is truly a new “classic” because it is such a timeless story. It is a plot line that people will still be able to relate to in 30 years. Although it is a romantic movie, the main character’s (Mia & Seb) relationship teaches the audience valuable life lessons and changes the norm of happy endings.

La La Land is incredibly relatable for younger generations. The story is of two artists who are struggling to make it in their careers in Hollywood. Everyone faces struggles from time to time, and instead of glorifying that, Chazelle really showed the rawness of trying for something, and completely failing at getting it. I think this is also what makes this film easy to appreciate.

All of the songs in the film have some kind of meaning behind them. One song in particular, “The Fools Who Dream” (Mia’s audition song for the movie in Paris), is a song with a great multitude of meaning behind it. The song is about Mia’s aunt who lived in Paris and was an actress. The song has an overall tone of melancholy, but has an optimistic message to it. Justin Hurwitz (the composer of La La Land) thought out every single note so perfectly. The instruments in the background from the strings and the flutes are supposed to “make us feel magical”, said Hurwitz on an episode of the Song Exploder. Hurwitz utilizes the major chords to make the song feel more emotional. The bridge of the song is supposed to symbolize Mia’s turning point in the film. Similarly to how the song picks up at this point, Mia’s career also picks up.

Take a listen to “The Fools Who Dream”:

But of course, not everyone loves La La Land. The main argument against the movie deals race and culture. Some are angry about how the main character, Seb, a white male pianist, is trying to make it big in the jazz industry- which is rooted in African American culture. They argue that there is whitesplaining of jazz by Seb. It is understandable where these critics are coming from- yes, jazz was founded by African Americans. But, Seb does acknowledge this. During the scene at the jazz club after Mia & Seb had first really met and Seb is telling Mia about his passion, he says to her that jazz was founded in New Orleans by ethnic people who could not speak the same language, so they used jazz to communicate. In a way, Chazelle does acknowledge that he has a white character who is trying to make it in the jazz industry.

Another argument made by NPR’s Pop Culture Happy Hour is that the opening song, “Another Day of Sun”, “gives a promise that the movie cannot fulfill.” Stephen Thompson also made the comment in this particular podcast that there is “a lot of Ryan Gosling whining about jazz.” This particular critic is made often; that there are too many montages in the middle, and it drags on a bit. However, that is just crucial character development that gives us more of a backstory and more plot.

La La Land is definitely going to be considered a modern classic in the near future. If you are really looking to cultivate your film appreciation skills, this movie is an awesome place to start. By really looking and listening for stylistic moves, you will appreciate this film. You don’t have to love the film- everyone has their own opinions- but, it is a good foundation film for anyone who is looking to get into different genres and learn to admire new things.