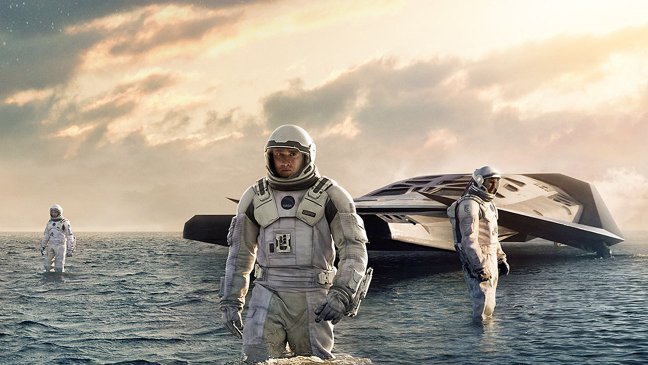 Interstellar (2014) follows former NASA pilot Cooper (Matthew McConaughey) as he attempts to negotiate his love of his children with his mission to save life on Earth.

Talents like Christopher Nolan only appear once every few decades. Not only has his style and influence transcended both modern pop-culture and the standard blockbuster fare, he has also found the sweet spot between the summer visual effect spectacles and the provocative art-house film.

Nolan’s films include such megahits as 2008’s The Dark Knight and 2010’s Inception. While these works are not without flaws (such as their reliance of contrived plot devices), they have helped change the film making field through their ambitious nature and by inspiring entire generations of would be directors to pursue careers in the competitive industry. Nolan’s latest project, the space opus Interstellar, is no exception.

Interstellar, starring Matthew McConaughey and Anne Hathaway, follows research explorers as they enter a newly-discovered wormhole and travel to a distant galaxy.

Life on Earth is slowly dying, crops are failing due to blight, food supplies are running low and the atmosphere is becoming unbreathable. The explorers investigate three planets that might be able to sustain life, they are searching for a potential home in order to save the human race from extinction.

Before taking this risky journey, Cooper (McConaughey) has to leave his children, Murph and Tom (Mackenzie Foy and Timothée Chalamet), behind on Earth in order to guarantee their ultimate survival.

While in space, Cooper’s children (their adult incarnations portrayed by Jessica Chastain and Casey Affleck) age at an accelerated rate compared to McConaughey’s character. Cooper tries his very hardest to return to his children during their lifetime while also trying to accomplish the larger task of saving humanity.

Like a strange concoction of Stanley Kubrick’s 2001: A Space Odyssey and Robert Zemeckis’s Contact, Interstellar tries to ride the fine line between emotionally evocative and intelligent science-fiction drama, and it mostly succeeds within it’s aspirations.

Although, Christopher and Jonathan Nolan’s screenplay suffers from an abundant amount of exposition and convenience, the film redeems itself by providing the audience with thought-provoking theories of space, time travel, and gravity.

Beyond this, the work provides some of the most groundbreaking production designs in the last twenty years. From catastrophic dust storms to gigantic mountain-sized tidal waves, the scope of this film is breathtaking. The amount of detail that the production designer, Nathan Crowley (The Dark Knight trilogy), puts into his work is both astonishing and mesmerizing.

The film is the absolute definition of what a blockbuster should be: daring and pushing the envelope. In terms of performance, Interstellar’s ensemble cast is terrific, but it’s really newcomer Mackenzie Foy who steals the show.

It’s 14-year-old Foy who gives the most grounded, emotional performance throughout the entire time she’s in the film. Her childlike innocence shines on screen and out.

Audiences seem to have fallen under the film’s spell as well. “After I first saw the film, I went sat in my room and thought about deep, philosophical ideas for the rest of the night”, senior Nicholas Bean said.

Noah Oehler (12) expressed that the film “was a very emotional film and the director did an amazing job putting you into Cooper’s shoes, even if you aren’t a father.”

Perfectly paced and truly exhilarating, Interstellar is ride that hasn’t been attempted in this massive of a scope in decades.