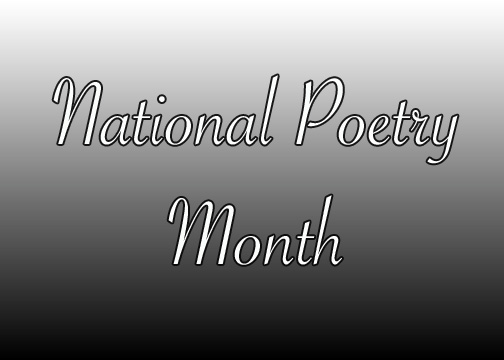 This April 2015 marks the 19th annual celebration of National Poetry Month. Founded in 1996 by the Academy of American Poets, it is now the largest literary celebration across the globe. And you may have no idea that it exists.

Or, perhaps you are perfectly aware of it, but at the mere mention of the word “poetry” you may recoil like you’ve just been presented with a live snake.

And your reaction is not unjustified. I admit, poetry has had a bad rep these past few decades. Chances are the only interaction you’ve had with poetry has been through your school, and chances are the majority of those works were written by Shakespeare or Keats or Plath, and it was rather difficult to muddle through the metaphors and iambic pentameter. While the Bard and Co. may be world-recognized greats, they are by no means the end-all be-all of the art of poetry. It’s a new world out there.

Unconvinced? Or, willing to dive into this new world but have no idea where to start?

Fear no more, o future poetry lover! I humbly present you with The Beginner’s Guide to Modern Poetry, curated by myself, to help you kickstart your foray into the magnificent new world of poetry.

~The Beginner’s Guide To Modern Poetry~

If you haven’t yet discovered this incredible poet, I’m insanely jealous. The first time watching Kay’s inspiring TEDTalk (which got not one but two standing ovations!) is a world-reorienting experience, and a feeling you will cherish and crave forever. Her advice to new poets? Write what you know. Even if what you know is a crush on Anderson Cooper, begin with what is true to you. Kay is a famed spoken word poet, so check out her videos on YouTube and her website, but she has also recently published her first collection of poetry, entitled No Matter The Wreckage. And it’s stunning.

This New-Orleans native is a two-time National Poetry Slam champion. (Yes, that’s a real thing.) He has three collections of poetry currently for sale, but my personal favorite is Songs From Under The River. First poems to check out? “Shake the Dust” and “Closer” are powerful calls-to-action that will have you eager to start a revolution, whether in the world or in your mind.

In my mind, Aptowicz is the definition of “the cool aunt.” I’m the proud owner of her sixth book of poetry, The Year of No Mistakes, which is simultaneously a love letter and a break up letter to the city of New York, and practically bleeds magic. She writes what she knows, focusing on her life and her relationships, but she makes you feel welcome in her world from the very first line, like you’re an old friend dropping by for dinner and she just remembered she has a funny story to tell you.

Granted, the aforementioned poets have works that can be a bit intimidating in length. If you’re hoping to wade into poetry via shallower waters, this minimalist poet is the perfect first step. Waheed is uncensored in her powerful views on race and gender, and her collection Salt is, as the name hints, to be taken with a grain of salt. But she is a powerful voice that is a tsunami even when her poems rarely extend beyond ten lines. Her second collection, Nejma, was recently published, and both collections are available on Amazon and Etsy.

Oh my god oh my god oh my god go watch “OCD” right this second how have you not done this already oh my god. Achingly real, this poet makes your heart swell and your knees weak. One of the things I’ve admired most about modern poetry is its willingness to bring to light matters that have so often been ignored or marked as “taboo.” Poetry today is an honest look into mental illness awareness, feminism, oppression, rape culture, and so many other social injustices. Poetry can be a voice when you cannot find your own.

I Wrote This For You

This book is necessary. It is a collection of work from the popular blog I Wrote This For You by pleasefindthis, which began in July 2007, featuring photographs by Jon Ellis and poetry that sometimes aligns with the pictures and sometimes doesn’t. If you’ve been hoping to write your own poetry but can’t find the inspiration, try out this technique by writing a poem about a photo. Be it of family, nature, society– whatever. You can even try the trickier reverse and take a photo based off a poem, be it an original work or the work of an existing poet. I Wrote This For You has the unique ability to make you feel singular in your suffering but, at the same time, utterly not alone in the world. The fact that enough people feel exactly the same way to warrant this book of “if you’ve been waiting for a sign, this is it”-esque poems and photographs is comforting even as it breaks you. The sequel, I Wrote This For You And Only You, is now available on Amazon.

Siken’s debut book of poetry, Crush, was the winner of the 2004 Yale Series of Younger Poets competition. But if the name doesn’t sound familiar, perhaps this poem does, which has been sweeping through Tumblr long before John Green quotes. “You’re in the car with a beautiful boy…” A powerful voice for the LGBTQ community, Siken has a unique form of writing (hello, tab button) and phrases that will stick with you for centuries. “Little Beast” is my favorite, with the line “history is a little man in brown suit trying to describe a room he is outside of.” Also check out Siken’s literary magazine spork if you get the chance. You won’t be disappointed. His latest book, War of The Foxes, comes out April 28th.

This poet is, in my mind, the definition of modern poetry, with a style so fluid you could almost take out the line breaks and read her works as a novel. I highly recommend “Ten Love Letters” by Von Radics, and checking out her website, clementinepoetry.com. Her poetry collections, including As Often As Miracles and Home, are for sale on Etsy at shop Where Are You Press. She currently lives in Portland, Oregon, and sometimes performs spoken word which you can find on YouTube. (Also, doesn’t she have the coolest name??)

Now here’s a poet I’m sure you’ve seen posted across Instagram and Tumblr. Poems from his first book, “Chasers of the Light: Poems from the Typewriter Series,” were typed up on backs of receipts, torn up book pages, and even scraps of tossed paper. He’s a professional photographer who photographs weddings on the side, but he has a voice and a vision I have never seen before.

Louder Than A Bomb

And finally, the crown jewel of modern-day spoken word poetry. This 2010 documentary follows then-high school age performers as they compete in the Louder Than A Bomb spoken poetry contest in Chicago. All works were written and performed by them, for them, and it is the ultimate testimony that poetry is for everyone and everything. It shakes your world like a drum-roll from the bleachers. It’s available on Netflix, so immediately put it on your queue. You can’t let this one get away.