NCHS gets a paint job 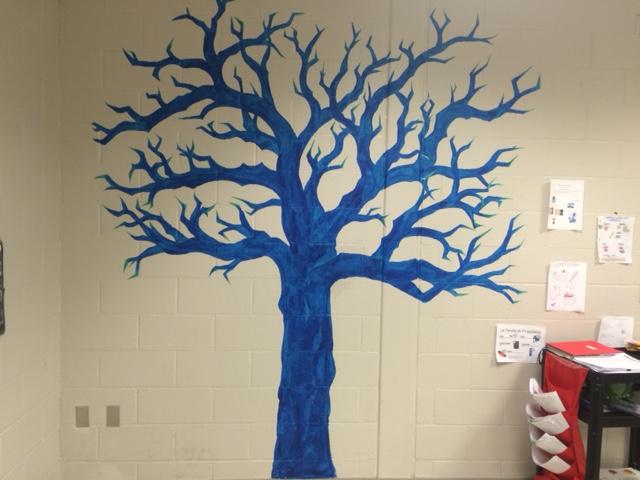 They appeared in the night.

Well, not really. They appeared at around 2:30.

But you’ve seen them, surely. Creeping along the walls. Watching you in empty stairwells. Whispering encouragements in the peripherals of your vision. A dizzying amount of orange, black, and silver paint.

For the past few years, NCHS has been getting an interior makeover. In a project started by Principal Bollmann, the stairwells, hallways, and classrooms of our school have been painted with positive quotes, educational equipment, and enough silver Ironmen to form an army.

But who are the mysterious elves behind the art? The stairwell murals in particular are under the charge of Mrs. Kelly, an Art teacher at Unit 5 for the past 16 years, who employs her Advanced Art Studio students and National Art Honor Society members to design and paint the pieces in class and after school. She said she was approached by Mr. Bollmann about having student-made artwork in the halls and she “loved the idea and was happy to do it.”

Each stairwell landing features educational equipment relating to a specific department. “There are 12 departments in the building, and four stairwells with three landings each,” she explained. A perfect fit.

Courtney Toon (12) is a student in both Advanced Art Studio 2 and the National Art Honor Society, and has played a role in the creation of the stairwell artwork.

“As long as the colors make sense and all major changes are run past her, she is okay with letting us use our own style to create the murals.” Toon also thought the art is “a really cool way to represent all of the different departments at our school. It’s a creative way to decorate and the fact that it’s done by students makes it even better.”

Toon painted parts of the physical education mural and the math mural and is very proud her involvement. “It’s awesome that I get to leave a lasting mark on the school.”

The art isn’t limited to the stairwells or the halls, however. Individual teachers are more frequently encouraging students to create artwork on classroom walls, too. Such teachers include Social Studies teacher Ms. Baker, who features multicolored handprints of past students as well as “Doriesha the Explorer” on her walls, and English teacher Mr. Feeney.

Personally, I have had the unusual honor of standing atop a wobbly desk in room 33 every Thursday afternoon in order to paint a 10-foot-tall tree on Mr. Feeney’s wall. A gigantic, leafless, bright blue tree. If I leave nothing else behind at this establishment, that tree is enough.

The task is not as easy as it sounds. The bumps and ridges of these cream cinder block walls may be aesthetically pleasing as white noise to our eyes during class, but attempting to maneuver a tiny paintbrush through the miniature mountains to attain a perfect twig point is exceedingly difficult.

But that might be just me. Sanjana Ponnada (12), for instance, has taken up shop on the opposite wall of room 33 to paint a dainty hot air balloon on a captivating galaxy background. Her talent is evident. A T.S. Eliot quote adorns the stars, asking onlookers, “do I dare disturb the universe?” 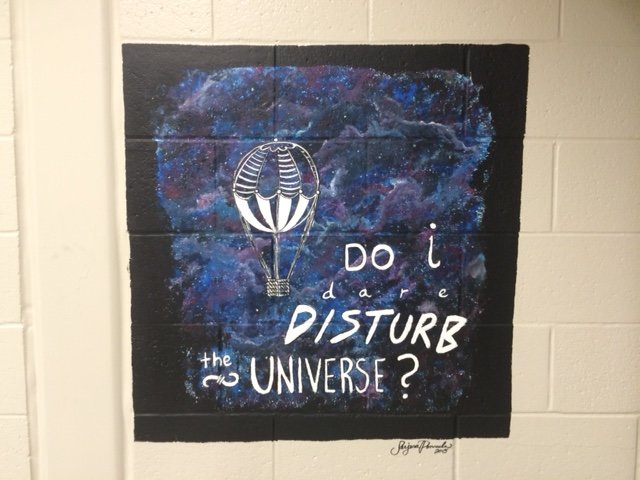 The newborn paintings of NCHS have disturbed the building for the better. Schools are intended to be farms of cultivating creativity, but there isn’t much to inspire when the walls are beige and the floors are beige and the desks and chairs and lights are beige.

Toon agreed. “I just really think that schools need to encourage creative talents because it helps with learning and shows that school isn’t something that is boring and restrictive.” Ponnada echoed the sentiment, saying “the murals are amazing! They permanently showcase all of our fantastic artists and add splashes of color to the otherwise boring walls.”

Ponnada is also a National Art Honor Society member and avid participant in the painting of the murals. She said, “the Art Department mural in the freshmen stairwell will forever be my favorite. It’s the first wall we ever painted, and recreating famous artworks was far more interesting and meaningful than the other subject departments. We all had some sort of connection and passion towards what we were painting. There was a lot of buzz and excitement because it was our first mural.”

Students are eager to see this passion for creation in other parts of the school, too.

Toon has suggested placing the art where one wouldn’t originally think to find it. “There is always a lot of graffiti in the bathrooms and I think it would be really cool if the school sponsored students and let them make educational graffiti,” she said. “It would be a new way to encourage learning and the school wouldn’t have to pay to have the bathrooms painted all the time.” It would also expand the reaches of the art project to beyond just the art class students, including students who may not have been able to fit an art elective into their schedules. Even student-maintained gardens or walkways would encourage other forms of creation, and showcase the multimedia talents of NCHS students.

The murals have served as a great inspirational starting point. “Many people have seen us painting them and it has inspired them to take an art class or just try to be more artistic,” Toon said.

While there are no plans “as of yet” from Mrs. Kelly on what we’ll do when the walls of NCHS have run out of space, the current artwork is here to stay. Ponnada is already reflecting on her high school painting experience with a smile. “Even though I’ll be graduating this year, I look forward to returning in the near future to admire progress and any new projects,” she said. “That’s the thing I love about mural painting– it’s an ongoing process that doesn’t just end with us.”