New teacher Mr. Robinson goes above and beyond 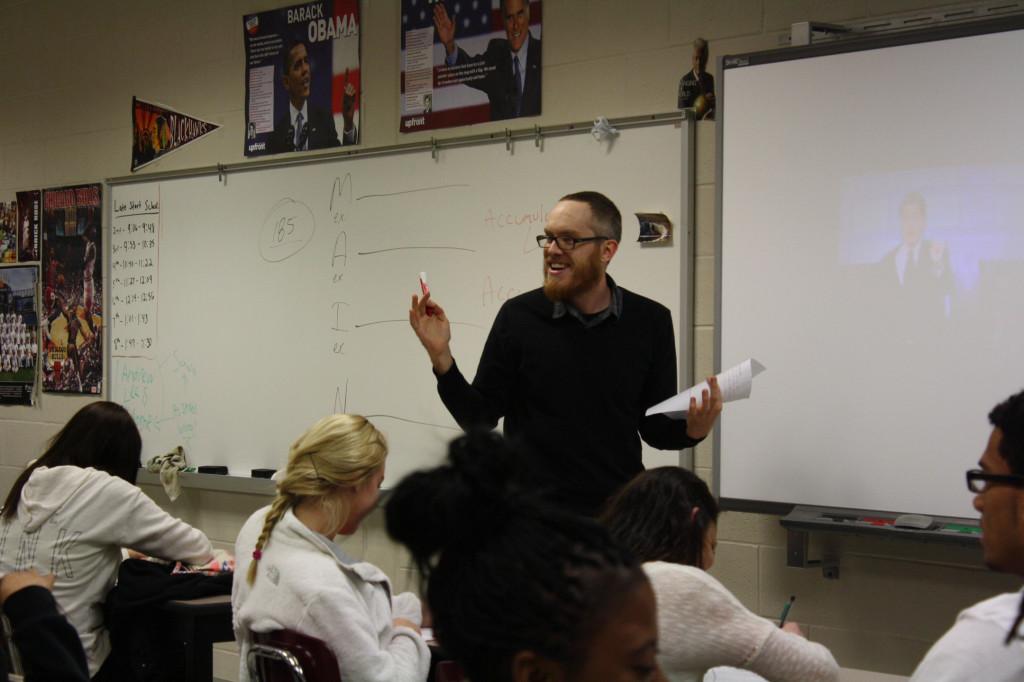 Mr. Robinson leads his 8th hour sociology class in a discussion about whether or not originality exists in modern times.

Each year, NCHS hires several teachers who bring new aspects to the school. This year, one teacher has specifically stood out as a hard working club sponsor, coach, and friend. Social studies teacher Mr. Stefen Robinson is a first year teacher here at Normal, and has already taken on such tasks as the DIY club, Mock Trial, and Sociology Club. He has also been involved sporadically with Students Embracing Diversity, the Culture Club, and the Gay Straight Alliance.

Mr. Robinson considers himself most passionate about sociology, and when students approached him about starting a club, he “couldn’t say no.” Though he admits that his involvement with all of these groups is overwhelming at times, he still commits to putting NCHS students first, and is leading Mock Trial in their comeback season. In addition to so much volunteering within the school, Mr. Robinson is also a founder of community education project Common Action Free School.

During the interview, Mr. Robinson stated several times how much he enjoys working with the students, and how he likes “high school aged people.” This was the perfect opportunity to ask him what he has learned from the us, because he gives so much to our student body. This question stumped him, until he emphatically replied, “what am I not learning?”

Mr. Robinson has left a visible impression on the student body as students of all ages share stories about the amazing things he is doing in and outside of class. Kristen Harms(12) has Mr. Robinson for sociology, and notes that he genuinely cares about the class.

“He gives us a say in everything and really takes our input to heart,” Harms said. “His style of teaching is different from all of my other teachers, but I feel like I learn a lot in his class.”

“Having students honestly say that the things we’ve done together has impacted them. . . it’s cool,” Mr. Robinson said.