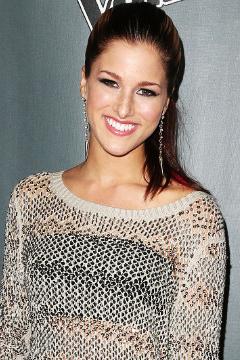 Cassadee Pope, the winner of the last season of The Voice, is still in shock of her success. She came onto the show as strictly a pop artist but quickly came to recognize that she isn’t a full-on pop singer. As her coach, Blake Shelton, spent more and more time with her on the show, she slowly began to realize that she is a great country singer. Shelton pushed her limits when it came to singing, but it paid off better than she expected. The songs that Pope chose to sing were songs that was emotionally connected to her. She always had a story behind every song she sang, and could really connect with the audience.

Although Pope sang multiple songs on this show, one of the best was “Over You”, by Blake Shelton. He wrote this song when he was going through a hard time; the death of his brother. It impacts him in many ways when he sings it, or has someone else sing it. Pope didn’t fail to make him proud by singing this song perfect enough to touch Blake’s heart. As well as singing to the best of her ability, she brought a presence to the stage that was simple, elegant, and highly effective with her long white gown. The people in the audience made it known to her that this was a good choice by buying Pope’s version of this song on iTunes. Pope reached the top of the chart with all her songs. Pope has officially signed with Republic Nashville, which was her major label prize for winning season 3 of  The Voice.

As Pope strives to start her music career, she stated in an interview with Billboard Magazine, “If you were to take Taylor Swift, make it edgier with a just a little hint of country and make the lyrics a little more mature, that would be the direction I’d like to take.” Pope will be a huge success in 2013.