After months of binging television and binging food, an amateur cook decided to combine her two pandemic past-times by cooking some of the iconic dishes she saw animated on screen 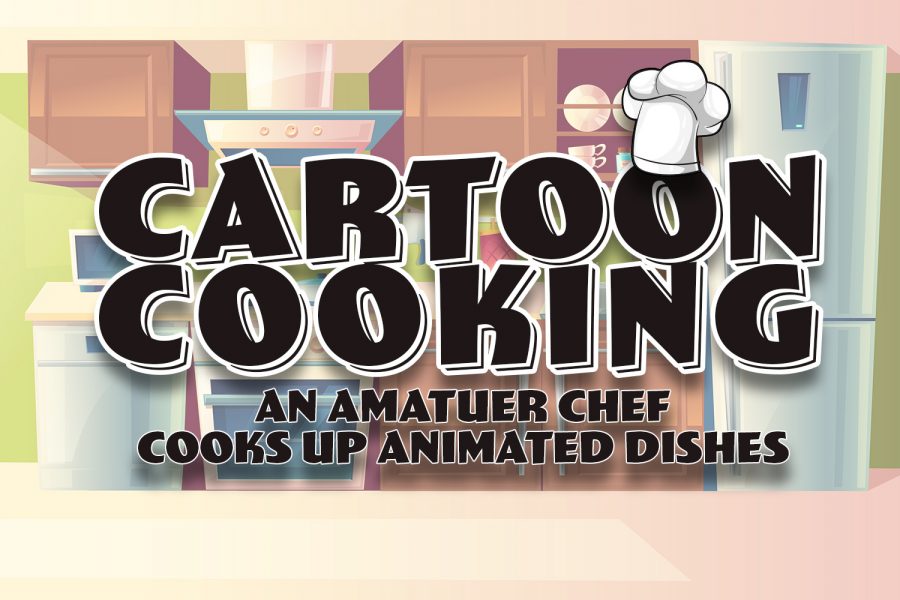 Join an amateur cook as they reminisce about a simpler time, when cartoons reigned supreme and cooking took place on a plastic stove. Erica Copeland attempts to recreate some iconic cartoon dishes in this food review.

Since the start of the pandemic, we all have been looking for a recipe to keep us connected and keep us sane.

During quarantine, my own life was dedicated to two activities – logging in to Google Meets and watching childhood throwbacks.

“The Aristocats” and it’s posh counterpart “Lady and the Tramp” lit up my TV screen, and “Teenage Mutant Ninja Turtles” intertwined with “Avatar: The Last Airbender” binges.

Despite all the odd crime-fighting mutant reptiles and bald-headed twelve-year-olds, I felt drawn to how delicious food looks in the animated world.

Even as a seitan-making, tofu-inhaling, rice cake-munching vegetarian, I found myself drooling over Antonio’s pepperoni pizza and Tony’s Town Square Restaurant’s spaghetti. My mind wandered to how the feasts displayed on screen might taste in reality — the juicy meats and stacks of pretty little cakes toppling over one another.

These cartoon classics cook up scenes that enchant and entice their audience. Images of donuts that squirt thick, glistening red jelly half a foot when bitten into. Of sandwiches that defy gravity with yellow cheese peeking from the sides and a triumphant olive impaled on the fluffy, white bread. Pancakes the size of a swimming pool with smooth butter running along the flawless browned top…

The characters that dined upon these awe-inspiring and sometimes odd creations sparked a food-fueled FOMO. A craving that with dine-in restaurants closed just couldn’t be satisfied.

After days and days of television binges and movie marathons, growing tired of devouring rice cakes, and after leaving a permanent indent on my couch, it was high time to take my eyes off the screen and focus them on a cutting board. (However, I want to mention that I am not some teenage-blob and that I managed to work in some yoga too).

After weeks of studying and training my eyes to find the most delicious-looking animated munchies and morsels, I whipped up my list of the top five cartoon contenders.

Let me be clear: I am not a professional chef by any means; I just work part-time in a deli. But it was time to bring these animated wonders into reality, to see how they really tasted.

I judged these recipes on three criteria. Their taste — if the dish was pretty good or so horrendous that I had to spit it out. Their appearance — if they could pass for the cartoon dish. And how easy they were to make.

Still, I’m just a teenage girl who burnt mac and cheese to the bottom of a pan a little over a year ago.

The Spaghetti from “Lady and the Tramp”
One of the dishes I wanted to recreate is from a sweet scene Disney fans might recognize — one where the setting could only be described as pure romantic nostalgia. It scene like something a sweet old nonna would remember strolling around Rome as a girl — green wine bottles housing wax-dripped white candles, a red and white checkered tablecloth, and the deep singing of an Italian man who just wants to watch some dogs on a date…
That’s right, I wanted to taste the iconic pasta dish made famous by Lady and her Tramp.
I wanted to see if the Italian-style spaghetti would have my in pure love or just puppy love with its giant meatballs and decadent-looking red sauce atop the thin white pasta.

The showstopper of this dish was meant to be my tomato sauce, which I envisioned as a sea of rich, velvety red sauce sprinkled with generous amounts of diced garlic, large flakes of chili, and aromatic oregano. But my attempt at sauce seemed more like one of Dracula’s victims rather than an Italian staple.
As a vegetarian, I did not add meatballs into the dish but rather large tomato chunks.
Overall, beyond the sauce, this was simple to make since I didn’t use fresh pasta (I imagine the Italian chef in the movie did), just boiling pasta and reserving the water to use in the sauce.
The spaghetti was pretty delicious, and I will make it again for sure. It does not resemble the iconic doggie date dish, though, and for that, it is rated:

Coraline’s Chocolate Cupcakes from “Coraline”
Lovers of the movie “Coraline” might remember the eerie pink kitchen where the Other Mother has crafted a mouthwatering mountain of chocolate cupcakes for her victim, Coraline. On top of a beautifully set clay table, the decadent-looking cupcakes are delicately frosted and finished with a tiny red raspberry.

“Erica,” you might say, “your cupcakes look adequate, and you took two whole hours to make them! Why did you rate the taste so poorly?”
Well, I don’t really like chocolate cake very much, so maybe making chocolate cupcakes wasn’t the smartest choice?
Despite my bias, I based my taste rating on how pillowy soft these cupcakes were and how good they made my grandma’s house smell. The cake was as fluffy as a cloud, pairing perfectly with the thick, pink buttercream made from scratch and a gorgeous and crisp raspberry.
These weren’t complicated to make, just time-consuming… If you’re looking for a thirty-minute dupe, just buy a Betty Crocker mix, and bam! Perfect, cute cupcakes in less than an hour.

New York-Style Pizza from “Teenage Mutant Ninja Turtle”
If you grew up watching the sewer-dwelling, semi-aquatic vigilante group, you recall their go-to victory meal – New York-Style pizza with it’s thin, foldable crust and layers of cheese oozing from the sides.

As a kid and still, to this day, the pizza in the Teenaged Mutant Ninja Turtles made me want to crawl into a sewer pipe and devour a slice. Fortunately for me, a part of my job is making pizzas, so I could try to replicate this reptilian treat this for free!

Working at a “natural~ grocery store”, I didn’t have to compromise on my plant-based diet (vegan pepperoni for the win)! I made this dish on Feb. 17, so please forgive my cheesy heart.

As delicious as this pizza was, let’s be honest… it looked hideous.
If I had taken it out of the oven five minutes earlier, the crust would have been criminally under-baked. To capture the New York-style crust, I ended up having to crisp the beautiful cheese, losing its elastic, ooey-gooey cartoon stretchiness.
I’m convinced that no one will ever be able to capture the gorgeous T.M.N.T pie truly.
Unfortunately for us, some things are a beautiful, unattainable dream. This pizza is one of them.

These were amazing. A-m-a-z-i-n-g. I had attempted the recipe once before for a cultural day in French class, but with my Grandma Pam’s help and Tiana’s tip of adding honey — these beignets blew my first attempt out of the water… or should I say swamp?
The pastries were very easy to make too, it’s just a simplified donut with a bit of a sweeter taste. The only reason the appearance ranked at a 4/5 is how clean the sides of Tiana’s beignets are and the fact that powdered sugar lays more like a blanket than a mountain.

The Breakfast from “Howl’s Moving Castle”
One of the most recognizable Studio Ghibli films, “Howl’s Moving Castle” centers around the kind, dutiful Sophie and the dramatic, but extremely handsome, Howl. Sophie becomes a member of the Howl’s Moving Castle staff, where she keeps order, cleans, and cooks.
Her first test is making a classic English breakfast, which she whips up in a matter of minutes. She cracks fresh, white eggs and feeds the shells to the fire, Calcifer. She then lays thick slabs of bacon into the skillet alongside the eggs, which behold a shiny, yellow yolk.
The sound of the crackling fats and the images of homemade bread paired with a chunk of cheese made this meal jump from the screen and land directly on my “Must Make” list.

Once again, my diet limits me. I am vegetarian, so my mom ate this for me instead. While this dish is reminiscent of breakfast in a small English coastal village — seagulls chirping outside of the window, the ocean serenading the town with its lullaby-like waves…
Reality slapped my lovely mother after the first bite. Sophie’s recipe, while idyllic, has no seasonings. It’s just an egg fried in bacon fat.
We added a bit of salt and pepper after the fact, but it just isn’t that same. The bacon was her favorite part, and the bread was fine. This was not difficult, and a simple breakfast is a dish something everybody should learn to make.

I have learned from this experiment that either one, I am not that good of a cook or two, animated food looks better animated.

Overall, this was a fun project that allowed me to practice my culinary skills and create different treats from my favorite movies and shows. My cooking ability wasn’t able to capture the cartoon magic on the screen, but I did satisfy my hunger for a little something to eat and a little bit of fun.